As the winter solstice approaches, I find myself taking stock of the past year and looking forward to projects and enterprises in the next.  A genuinely disappointing episode with a would-be apprentice who took on a job way beyond his abilities, then refused to pay me for doing most of the work, is slowly grinding it’s way through the courts.  That knocked a big hole in my summer, in the middle of which I lost my brother-in-law after a long, painful struggle with liver cancer.  In September, we lost our dear friend Matt Ross, and I’m really pissed off about that.

Matt was just about the only person with whom I could have wide-ranging conversations about woodworking with hand tools, building small boats, the eccentricities of timber framing and neighbors.  How sharp is sharp?  How thin, or thick, is a shaving?  And he left all these wonderful tools behind, my responsibility to sort and sharpen and find uses for… 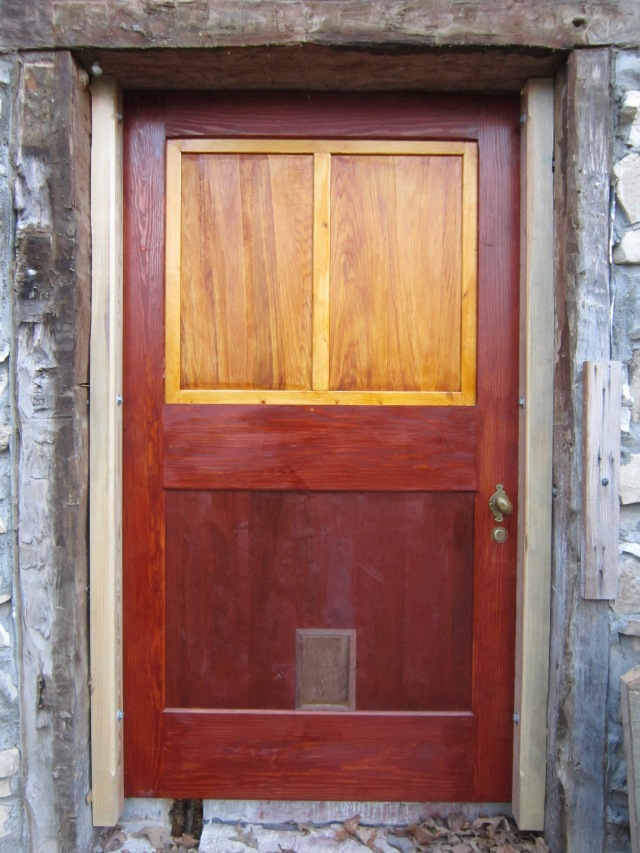 This door has opened an entire realm of possibilities.  Matt built this room from rough limestone gathered off the farm, hewed beams from red oaks that he felled himself, and never got around to finishing this opening (a bum knee, chronic pain; an obsession with hand-forged, laminated steel blades).  I was supposed to be helping him hang a different door there when he died.  Turned out, Sheila didn’t really want that door after all, so I built this one to suit.  The frame is 2″ thick Douglas fir, set into 4 x6 pine jambs.  Blackberry the cat is happy with the cat door, and on sunny days the upper panel hinges inward as a sort-of Dutch door.

All this involved re-routing water and propane lines through that cut in the concrete, and removing part of the 6 x 8 oak sill and concrete foundation inside to make room for a 4-panel farmhouse door.  The house is well on its way to being handicapped accessible, should that ever be necessary.  Now, on to the Japanese tools.

“The Zen sect saw the distinction between the One and the Many as a necessary defect of language, or more precisely, of the intellect, and maintained that Nirvana exists here, now, in everything, but that it can be apprehended only by a direct intuitive grasp, and that intellectual approaches can lead only to partial, and hence false, understanding.”  Arthur Drexler, The Architecture of Japan (1955 Museum of Modern Art) p. 205m

“While Japan has been, since the eighth century, a land dotted with Buddhist temples, wooden structures that are usually rebuilt as before when they are destroyed by fire, the most extraordinary notion and practice of historic preservation are applied to the Shinto shrines in the forest of Ise.  These are exceedingly simple, seventh-century buildings made of soft-textured cypress beams, standing on raised platforms and having crossed end-rafters and thatched roofs.  They appear modeled after storehouses for rice from earlier times.  Each one is set on a rectangle of carefully laid out stones.  Next to one side of this rectangle is another, identical rectangle of stones.  Every twenty years a team of carpenters arrives, and on each empty rectangle, they construct an exact replica of the building in the adjoining space.  Using only hand tools, they cut the cypress beams with immaculate precision and leave the finished work unpainted.

“When the new building is ready, Shinto priests perform a nighttime ritual during which the gods and the sacred objects are moved from the older building to the new one, at which point the older one is carefully dismantled so that the remaining beams and other materials, considered spiritually as well as materially valuable, can be sent to other Shinto shrines in the country that have need of replacement pieces.  The teams are made up of older, experienced carpenters together with younger ones whom they are training, the very ones who will be in charge of another reconstruction twenty (or nowadays perhaps forty) years hence.  This practice began in 690 and has continued ever since, except for an interruption that lasted for a century and a quarter; in 1993 it was carried out for the sixty-first time.”  Paul Varley, Japanese Culture (2000 Honolulu) pp. 17-18

Ise by Kenzo Tange, Yoshio Watanabe, and Noburo Kawazoe (1965, Zokeisha Publications Ltd.) is a stunning photographic documentation of the 1953 rebuilding of the temples at Ise.  What is not immediately apparent; that there are two temple precincts, several miles apart, and thus two separate and complete building processes going on, becomes clear through the maps, text and photos.  The appendix shows two similar Shinto temples that have not been subjected to this generational cycle of rebuilding, but have instead been carefully maintained, one from 1744, the other from 1346.

I will get back to work on the boxes directly…meanwhile it isn’t too late to put those books on your Christmas list.  Meanwhile, we still desperately need to have a dialogue about the continuation of craft culture (particularly woodworking) in America.  Too much attention focused on How we do work simply distracts from the larger, more important question Why?  Rearranging the deck chairs will not save the ship from sinking… 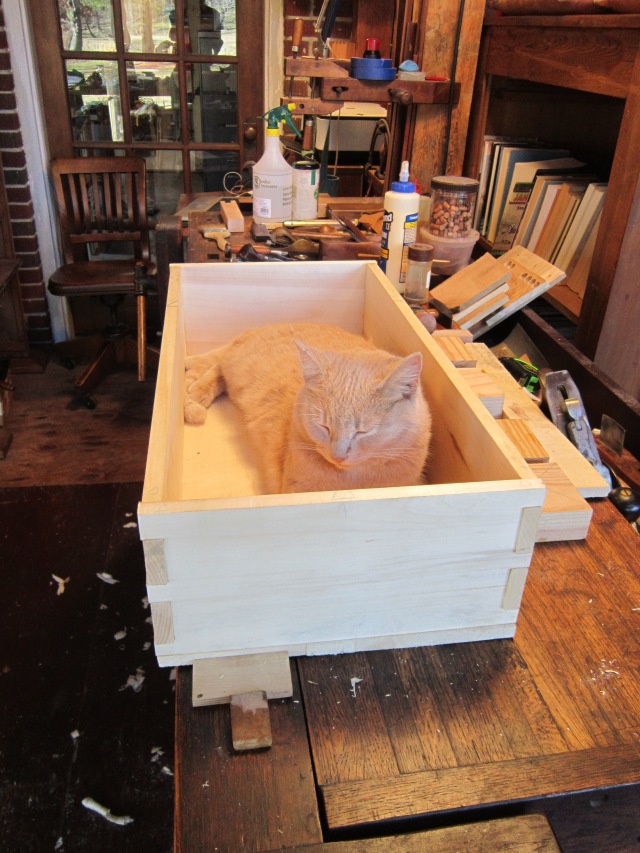