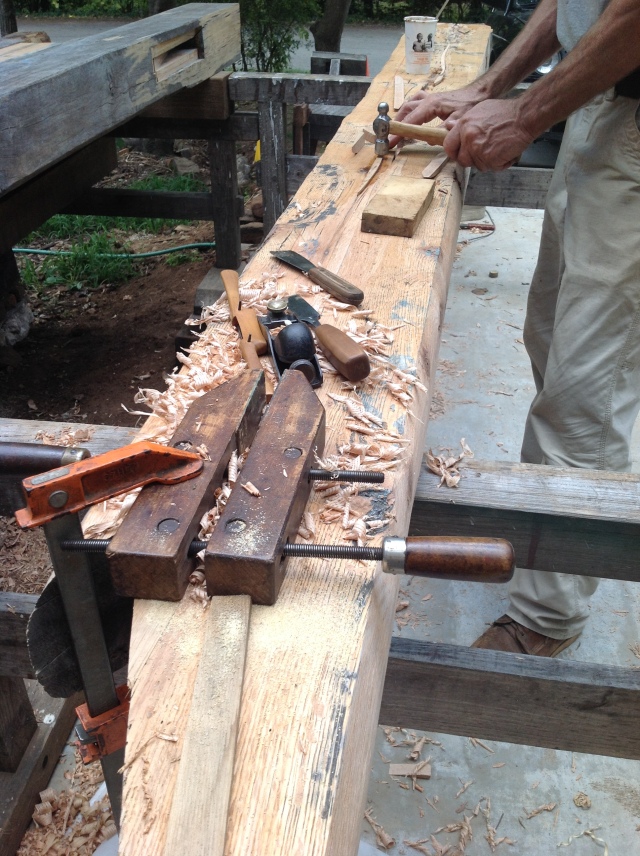 There are a lot of opinions these days about what is the best tool, the best bench, the planinest’ plane or the slickest saw to make you the best woodworker you can be.  Is this some kind of competition?  I’m not in that game.  Every beam is a workbench, every clamp is a vice.  Every tool has a purpose, it’s up to us to discover what that is.  The I Ching says, “Everything that has form is tool; everything that is without form is tao.”  It also says,  “The beginning of all things lies still in the beyond, in the form of ideas that have yet to become real.”

For the past couple of months, whenever I could find the time, I have been fitting up a frame out of some seriously twisted oak timbers.  I’ve learned a few things, using some tricks and tools that have been acquired along the way.  Some of this is terrain that most woodworkers never have and never will explore, and I have made some attempt to share the experience.

When I started learning timber framing back in the 80’s, the book to have was Tedd Benson’s.  Fortunately, I didn’t get the memo on that; instead a friend had given me a copy of Cecil Hewett’s English Historic Carpentry.  Hewitt didn’t discuss tools or layout (go-to for roof design and drawing style); as I learned later, Benson didn’t really explain layout.  Neither did anyone else, at least not very well, or with any sense of authenticity.  Jack Sobon hints a bit at square rule in his second book, and there’s an early Fine Woodworking article by Ed Levin that explains  a bit of layout.

The old books on the framing square refer obliquely to this mysterious process called “boxing the joints”, about as useful as the Essex Board Measure table.  In The Timber Framing Book, Stewart Elliott completely missed the point on brace layout, it’s so obvious that he hadn’t looked hard at a framing square or a barn.  Further back, in the 1920’s, Audel’s was seriously misinformed about braces.  Recently, I took a long look back through Roy Underhill’s Woodwright’s Shop series, thinking that I might have missed something.  Nope.  This is one place where the luminaries will leave you in the dark.  They’ll tell you how to cut, what tools to buy, lots of he-man raising pics, but very very little about layout and design.

The thing is, laying out is pretty fundamental.  The lines have to be in the right places, and then you need to know how to cut to the line.  If you expect to make a living, the process has to be accurate and efficient.  Most people, coming from carpentry and cabinetmaking, assume that the timbers need to be straight and square to begin with.  I know I did, and there’s certainly nothing amiss with that approach.  You will get results, your buildings will  just look rigidly mechanical and sterile, because there’s nothing inherently organic about straight lines.  Nature designs with curves.

Laying out bowed, twisted, crooked, waney timbers requires a different approach.  Until a couple hundred years ago, any good European carpenter would have been able to lay out joinery, cut and fit, in just about any sort of timber imaginable.  He would have been equipped to square timbers with an axe, and plane their surfaces with a broadax and slick. Layout would have begun with a plan and section drawn out on the ground, timbers cribbed up on blocking, joinery marked out with a plumb line and scratch awl.

In the American experience, timber was long, straight, virgin…and a new model evolved.  We call it Square Rule, and it’s evident in most barns and houses from about the second quarter of the nineteenth century until maybe the end of the century, depending on where you are.  Audel’s certainly didn’t understand it, or at least they failed to explain the concept.  Neither did any of the mid-20th c. writers mentioned earlier.  Meanwhile, the evidence of Square Rule lay like a blueprint, echoing the Plumb Line in buildings of an earlier epoch.

I have combined square rule layout with plumb line layout in this frame; because it suits me, and planing all that timber square would have been a ridiculous waste of time and wood.  The initial bents were cut in a workshop, and with some adjustment they still fit.  For the main beam and braces, I wanted a more traditional look, and a chance to use some tools that haven’t seen use for a while.  Diminished housings are easier to cut and fit than parallel housings, particularly in twisted timber.  There is no one best way; there is only geometry, sharp tools, good joinery design, and respect for the trees.

Dangit!  I got e-poxy on my knee britches…

The trees, btw, are all second growth, now.  Which is a polite way of saying that we’ve cut all the good straight virgin timber and all that’s left is crooked, twisty stuff that is a real challenge to work with.  Much like what the European carpenters had to work with after centuries of building, war, shipbuilding, war, more war, and general waste and abuse.