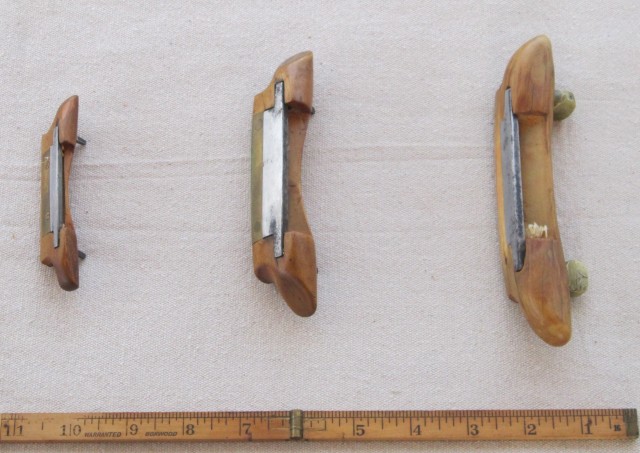 I used to carve spoons and give them away.  It took so much time, I would have been at a loss trying to either get a decent wage or to sell them at any reasonable market value.  Besides, it seemed like a really gracious way to show appreciation for a talent I didn’t have.  Karen Jackson told me that the hook on the end was traditionally for the cook, so that she could hang the spoon on the side of the soup pot.  It always took me nearly as long to make the hook and resolve the handle as it took to carve the rest of the spoon.

Eventually, I concluded that I was simply overworking my spoons (they are, after all, one of the most rudimentarily utilitarian of objects) and started cutting them out on the bandsaw.  Over the years, I have collected a number of old spoons from flea markets.  Like most old things, they have had a life of their own and there’s something to be learned…

Somehow, my blog got picked up by Woodspotting (big whoop!).  So, I go over there now and again, and “troll” the unsuspecting and enthusiastic young woodworkers eager to expound their new-found expertise.  One such expedition inspired me to share a bit, and produced this exchange:

My neighbor came over the other day, asking for help sharpening a couple of Frost Sloyd knives and a hook. The knives were easy, the hook nearly impossible. I did what I could, showed him a couple of tricks, and steered him to Robin Wood (he’s watching YouTube, anyway). My spoon-carving techniques evolved in the 70’s & 80’s, before there was this wild proliferation of advice on everything conceivable. (Do you remember the Dan Dustin article from the old Fine Woodworking? I probably had it memorized at one time.)

Anyway, the hook knives have always seemed clumsy to me. I prefer a small, short gouge that I can direct away from my fingers (it’s also a lot easier to sharpen), seasoned wood even though it’s much harder than green, and a spokeshave with the handles cut off. My favorite knife is an old farrier’s knife that I accidentally broke the hook off of (it was useless anyway), and I use a scraper for the inside of the bowl (quicker than sanding).

Practically, I found that if I traced patterns and cut out blanks on the bandsaw, I could carve spoons almost fast enough to make minimum wage. Starting out with the hatchet and chopping block, moving on to shaving horse and French-pattern drawknife, I learn something every time.

The small spoons that we use daily (maple, plum, pear, some of them more than twenty years old) have become so familiar that I find myself offended by the coarseness of restaurant spoons. There’s something a bit vulgar about sticking stuff into your mouth when you don’t know whence it came or from what ingredients it was made.

To which I received this reply:

That FW article was probably before my time. Hook knives are excellent, especially for deep bowls. In green wood, they can work nearly as fast as a gouge. I’ve never tried to restore one, but I can imagine it would take a great deal of patience.
Thanks for sharing.

And to which I just couldn’t resist commenting:

If they can work “nearly as fast as a gouge”, why not just use a gouge?