Winding sticks on a board, preparing stock.  Mind the gap.  This is the first start-to-finish benchwork project for me in several years, salvaged Asian mahogany from a pallet.  After sorting out most of the embedded gravel, nails, and broken drywall screws with my Parks planer, I have a small pile of ½” scantling, 3 ½” wide.  Just enough to make a small box.  No wonder exotic wood is so expensive! 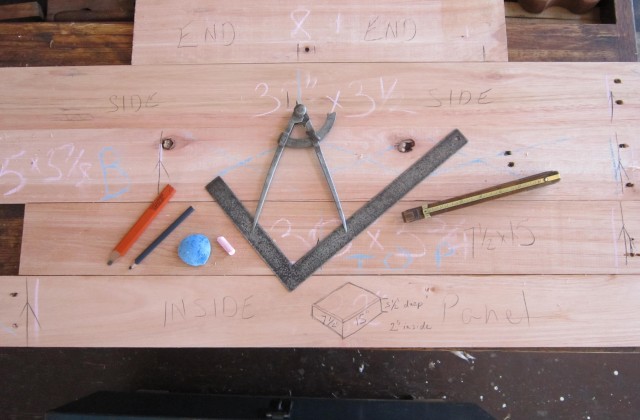 The G in the masonic emblem, what does that stand for?  Most people will tell you “God”, but if you look back far enough, even the Christian God has had a lot of different names.  I prefer to believe that it represents Geometry.  What one chooses to believe is subjective, but when pressed for an answer, I find that for me there are three constants.  Gravity has never yet failed to present, you can dial it up or down with caffeine or alcohol but it’s still there.  Geometry is constant once you understand that geometry is purely theoretical, reality is made up of crooked lines, and most solids don’t resemble their Pythagorean ideals.  Behind door number three: Gullibility, the original G-spot.

So much for leprechauns, unicorns, credit default swaps, and conspiracy theories involving tall white aliens…we are all subject to confirmation bias, believing something because it fits our particular interpretation.

Enter the luminary:  Several years ago, I was laying out a particularly complicated piece of joinery, and happened to have a conversation with one of the resident sages of timber framing.  OK, I live on (under?) a rock, and there isn’t enough flat space to set up a decent establishment, so I was busily developing the post heads of my English tying joints by square rule (on the stick), which was working out just fine, thank you.

The luminary informed me that the old  carpenters always laid out the post head “in the establishment” meaning engaged in a pile of other timbers situated over a geometric template marked on the floor (or the ground), of which by necessity there would have to be two in this instance.  When someone, anyone tells you that a particular practice is always or never…listen to your G-spot.  With absolutes such as always and never there’s no room for interpretation and innovation.

Timber framer, boatbuilder, dreamer, writer, musician; collector of books, tools, aphorisms. "There is nothing, absolutely nothing…half so much worth doing…as simply messing about in boats."
View all posts by michaellangford2012 →
This entry was posted in architecture, carpentry, traditional building, woodworking and tagged Apprenticeship, Architecture, Timber framing, woodworking. Bookmark the permalink.