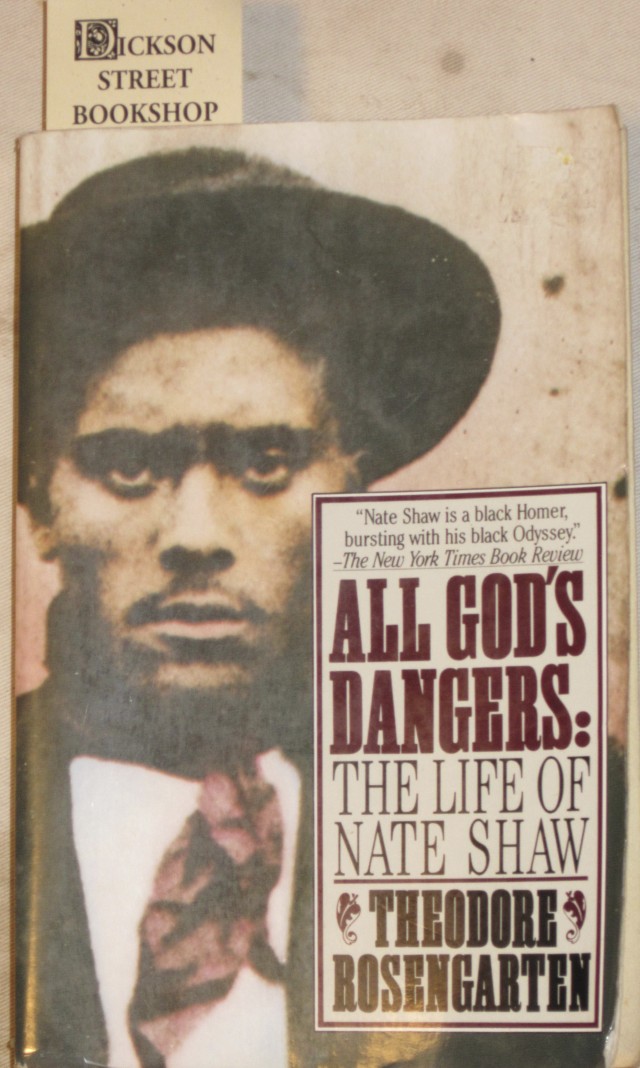 All God’s Dangers: the life of Nate Shaw by Theodore Rosengarten

Wendell Berry, in his book of essays What Are People For? (North Point Press, 1990) has a short piece titled A Remarkable Man, which is a review of All God’s Dangers.  With no reason to believe that I can write a better review, or a better essay, I will say that Nate Shaw is the most authentic voice of the black experience in the American South that I have ever encountered.

Nate Shaw’s illiteracy, as presented through Rosengarten’s careful transcription allows us to experience Nate Shaw directly.  Here is a personal narrative which has never been influenced by The Book of Job, or Odysseus struggles to return to Ithaca; nor by Maya Angelou, James Baldwin or any other black Southern writer.  Shaw’s wisdom comes from within; in Berry’s words “Shaw burdens us with his character…Here is a superior man who never went to school!”

I read Let Us Now Praise Famous Men years ago; there’s a part where James Agee apologizes for the burden that he and Walker Evans placed on their hosts; he mentions the existence of a few black families nearby that they didn’t visit, out of concern that the requirements of simple hospitality would have placed excessive strain on already meager resources.  I want to believe that Sam Mockbee understood Evans’ sentiments, and for that matter, that he might have known Nate Shaw.

Frankly, I can’t see that sort of compassion in the Rural Studio, at least it isn’t apparent from their press kit.  What I’m seeing in the $20k house is architects being architects,  listening to architects to reinforce their ideas, looking to architects for guidance, and ultimately answering to architects.  I have asked, by e-mail, the same questions to the current Thesis Studio students, to Rural Studio director Andrew Frear, and to the head of Auburn’s architecture school.  And I have received nothing in return.

Andrew, let’s do something remarkable.  How about communicating with someone who isn’t an architect for starters?

Timber framer, boatbuilder, dreamer, writer, musician; collector of books, tools, aphorisms. "There is nothing, absolutely nothing…half so much worth doing…as simply messing about in boats."
View all posts by michaellangford2012 →
This entry was posted in architecture, education reform, woodworking and tagged $20k house, Architecture, Rural Studio. Bookmark the permalink.