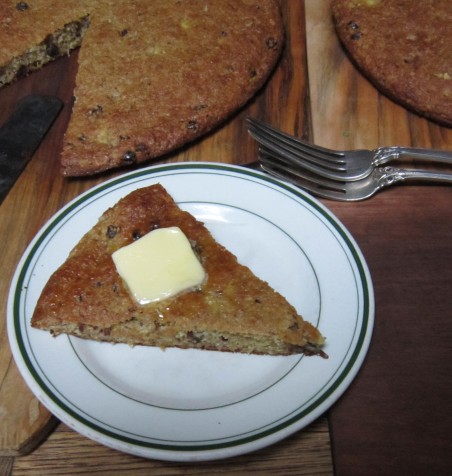 “…give us this day our daily bread.”  We have come a long way with this stuff, and it’s still evolving.  Twenty years ago, I was making cornbread from packaged mixes and realized that the leftover Irish oatmeal from breakfast could be added in for a bit of texture.  Soon enough, I discovered that making cornbread from scratch was relatively easy.  A short step from that to experimenting with various shortbread combinations, grinding all sorts of grains and seeds into meal and using a bit of salt and baking soda for leavening.

Like most of my generation, I grew up on Wonderbread; living on a farm, we fed wheat shorts (that’s the bran and germ) to the hogs, not realizing that they were getting the better part of the grain.  White bread eventually lost it’s appeal and I started searching for alternatives, once making my own sourdough pancakes for an entire summer (add a bit of baking soda and sourdough will expand like a soufflé).  My sister gave me a book about baking bread for Christmas one year, there were loaves everywhere that winter.

Eventually, our household began moving away from wheat altogether (the gluten thing), and in time rye, oats, barley, buckwheat were marked off.  Corn (maize) is mostly starch/sugar to begin with, when you consider the probability of GMO contamination, off the list as well.  It’s comforting to assume that Native Americans had cornbread as a staple, or that Jesus ate buttered croissants for breakfast.  More likely, acorns were the staple meal for most pre-Columbian aboriginals as well as our European ancestors, supplemented with chestnuts, walnuts, pecans, chinquapins, beechnuts, hazelnuts, and whatever fresh or dried fruits were available.  Leavening would have been the result of natural fermentation, and salt was a matter of survival not taste.

zest from an orange

combine ingredients, mix the dry stuff first, add milk slowly until the batter is just pourable.  if you have a sweet tooth, try a bit of honey.  heat a cast iron skillet until butter sizzles, lay in the batter, shape it to the pan, bake for 30 minutes at 350º  makes two 1-pound loaves, costs under $5/loaf.   enjoy

Timber framer, boatbuilder, dreamer, writer, musician; collector of books, tools, aphorisms. "There is nothing, absolutely nothing…half so much worth doing…as simply messing about in boats."
View all posts by michaellangford2012 →
This entry was posted in cooking, food for thought. Bookmark the permalink.